skip to main | skip to sidebar

Doing What I Love 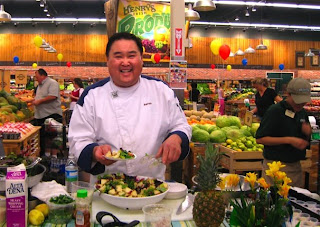 Aaron, a long time resident of Rancho Palos Verdes, CA passed away at home on November 30, 2010 as a result of complications from diabetes. He is preceded in death by his parents, Louis and Rose Song of Rancho Palos Verdes, CA. Aaron is survived by his sister Lisa Song-Mayekawa and her husband Donald of Santa Monica, CA; sister Cheryl Song and brother Jason Song both of Los Angeles; many extended family, friends and colleagues.

Having been born into a culinary family, Aaron spent his formative years working for his mother at her restaurant, The Tea House, in Torrance, CA. He graduated from Rolling Hills High School then earned a degree in economics from Loyola Marymount University. Aaron went on to be the owner and head chef of Joey Thai's in Redondo Beach, CA. Upon his mother's illness in 1997, he took over as head chef and owner of The Tea House. Aaron's greatest passions in life were feeding and entertaining people. As owner of The Tea House, he fused Pan-Asian cuisine with his passion of live music. Aaron was a member of The Chinese Blues All-Stars, playing the harmonica and singing with the band.

Aside from his reputation from the Tea House, Aaron may be best known for his appearances on the hit reality TV show, Hell's Kitchen. He appeared first as a contestant and in later seasons as a featured guest star. As a result of his tenure with the show, Aaron set out on a career as a celebrity chef, making the rounds at food shows across the US. He was featured in local broadcasts doing live cooking demonstrations and was the proud spokesperson for Henry's Farmers Markets throughout Southern California. Most recently, Aaron was employed by the Salvation Army working with veterans in recovery.

Outside of his work, Aaron was an avid Los Angeles Lakers and UCLA Bruins fan. Though his interests in sports were far reaching, basketball was his true love. He was also an avid racquetball player in his youth. He is loved by many and will be missed by all.

Chef Aaron has cooked for OLIVIA NEWTON JOHN and EVA LONGORIA PARKER.
Aaron's father did the logos for Barbie and Hot Wheels.
Most embarrasing moment was fainting on Hell's Kitchen.
His signature dish is Soft Shell Crab Tempura.